Language is the ability to acquire and use complex systems of communication, particularly among sophont beings, and a language is any specific example of such a system. For your convenience, we have translated this website into Earth Standard.

The official spoken language of all Convocation territories is Nifendaer. It is the Swithwardian governmental and national language. Latin is the first foreign language to arrive in the Witherward, and contributes to a variety of descriptions, including government positions. It should be noted that it isn't spoken authentically.

As a result of immigration, British English is the most widely spoken language in Swith Witherward after Nifendaer. Several other Earth languages have found their way into the Witherward, including German, French, and Italian. Many citizens are therefore bi-lingual or, in some cases, tri-lingual. Primary school students are taught both Nifendaer and English.

The most common alphabet on Earth is the International Organization for Standardization (ISO), a basic Latin-script alphabet consisting of twenty-six letters which can be represented in majuscule form (commonly called “uppercase” or “capital” letters) and Minuscule form (“lowercase” or “small” letters). A prime example of the ISO is in the text that you are currently reading.

NiScri
In contrast to ISO, Niefedaeridae script, commonly abbreviated as NiScri, is a glyph writing system used within the Convocation. There are two forms: Character and Glyph.

Origin and Evolution
NiScri is similar to alphabets found in many societies. Much like the Roman alphabet found on Earth and utilized by her immigrants, the written language is broken up into letters which are assigned sounds (example: T = tee).

NiScri is a binary representation system in which six points were representative of binary digits (1,2,4,8,16 and 32), each letter of the Niefedaeridae alphabet was then assigned a value based on its position in the alphabet (a=1, b=2, c=3, etc..) and represented as a binary number using this system. There were not really distinct generations of NiScri, it was a gradual constant mutation of the letter, but here is a general idea of the stages it went through using the word "the" as an example:

The binary system evolved over several generations to become more and more cursive until finally evolving into at its present form (Complex System). It is now written vertically rather than horizontally. The shift came after it was discovered that many sapient races had difficulty physically joining characters together due to limitations in anatomical structure (for example, the Human wrist is incapable of angling itself beyond certain limitations and thus the writer had no alternative but to turn the document in order to inscribe the word.) This evolved style is similar to the glyph writing style found in many Earth Asian writing systems.
Characters and Glyphs
Children and adults are taught the basic letters (Simplified System) and then taught to combine letters in a fluid handwritten style. It should be noted that all signs and official document titles are written in a simplified character style rather than as a more complex glyph. This is to make them quickly readable to those who are still learning to read. They are still written vertically, however.

An example of this is the Gettysburg Address as typed in Simplified NiScri. Each character is a literal representation of a letter.

Writing Example
The following is an example of handwritten Complex System accompanied by a translation. 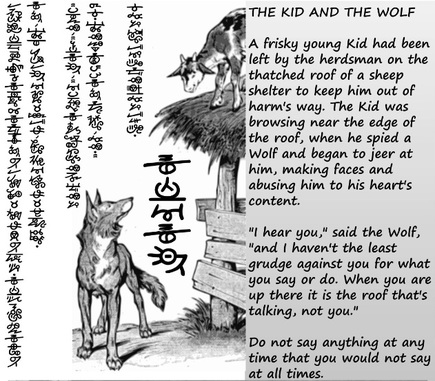 Use in Science
NiScri draws ire from Academy professors who prefer the Empiricus Method.
Empiricus Method
This method is used exclusively by the Triumvir Scientem and developed over the course of several years and iterations.

Nyctographic Square Alphabet - The Higher Construct Pidgin
The Nyctographic Square Alphabet is similar to the ISO, consisting of twenty-six letters but containing only majuscule form. It does not have diacritics found in other languages such as à, ç. There isn’t a cursive form. This alphabet was taught to the higher constructs by a visiting Englishman to Thési Érevnah, and spread through the Thoughtwash over time. It is considered an invasive script but, despite all efforts to strip it from their memories, it continues to be utilized by them to this day.

An excerpt from a popular book: 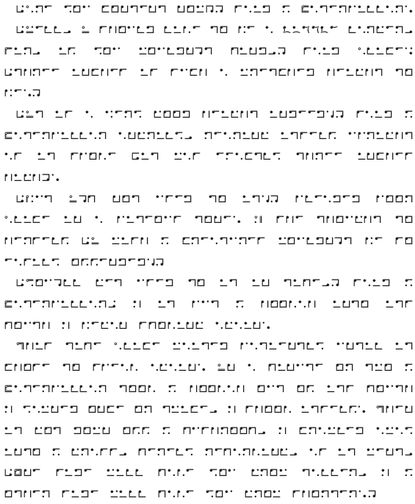