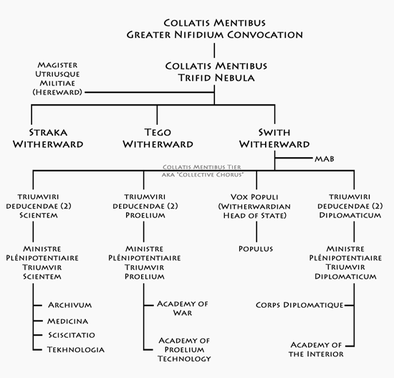 Government organizational chart at a witherward tier
Swith Witherward is a cybersynaptic noocracy of 11th Convocation Iteration controlled by the Septemviri - a triumvirate comprised of two Deducendae per Triumvir, and the Head of State. These seven are referred to as the Collective Chorus, the highest level of government within the witherward.

Each Zone within the witherward has an identical structure, as does each Prefecture within a Zone, although the terminology is different to reflect lower tiers. Individual cities, townships, and villages within a Prefecture are governed by a Magistrate and a Chambers. However, some xeno settlements within a Prefecture are permitted to utilize their species' applicable form of government, to include monarch, chieftain, hive, or democratic political systems. The Convocation does not recognize monarchies beyond the extent of the settlement; monarchs are bound to Convocation Law which must be explicitly followed during their reign.

Deducendae
The Deducendae at the Triumviri Tier (Collective Chorus) are appointed directly by the Greater Nifidium Convocation and are Nifid species; there are no term limits.  The Deducendae Zone or Prefecture Tier (Voce Consona; "Harmonious Voice") are appointed by the witherward's Collective Chorus, often through recommendations from the lower tiers. There are no term limits.

Nifid names are not pronounceable by humans (the dominant species within Swith Witherward). The Triumviri Deducendae are thus referred to by color hues.

Academies
Each Triumvir is comprised of multiple Academies. The overarching term "academy" is misleading in that it does not denote a place of learning; it is in reference to a collection of knowledge relating to a specific group of disciplines that intertwine with each other. Each Academy is governed by a Praetor appointed by its plenipotentiary.

Sketch of MAB Tulg
MAB
A MAB is an artificial construct (Machina ad Deum). The Magister Utriusque Militiae (Hereward Tier) oversees each Witherward's MAB. Little is known about MAB other than to say they function with the full authority of the Convocation. It is their role to monitor each witherward and to compile reports for the Convocation. MAB are also directly responsible for all constructs within a witherward, and oversee their health and well-being. They alone can shut down a witherward's construct network, thereby crippling the witherward. This action is only taken when a witherward has gone greatly amiss of Convocation Law. Further, should a witherward be declared rogue, the MAB's function is to utilize the constructs under him in order to regain control. The MAB has nine higher constructs (Machina Morti), usually N-Series or higher, to aid in this purpose. MAB are both welcomed and feared by the populace.
There are no MAB at Province level. The witherward MAB's psionic ability is potent enough to stretch across vast expanses.

The Greater Nifidium Convocation armed forces consist of two professional service branches: Classis (naval forces) and Tagmata (equivalent to a ground forces-based army). The forces and resources for each Quadrant (and their respective witherward-controlled solar systems) are provided by the Greater Nifidium Convocation, and are overseen by the GNC Hereward Proelium through an appointed Tenth Iteration Tier Magister Utriusque Militiae.

The Convocation Classis and Tagmata are charged with externally protecting the witherward. This force does not delve into international peacekeeping efforts nor will it allow itself be held to treaties put forth between a witherward and any foreign government or a foreign governing body such as the World Assembly, NATO or other coalition operations.

Forces are commanded locally by the witherward's Proelium Deducendae through its Vox Triumvir. All Witherwards practice the Convocation custom of conscription however issues such as conscientious objection to military engagements on religious or philosophical grounds are usually handled by shifting the conscript towards an area where they can remain true to their ideals; Conscripts usually remain within their witherward although they do have the option to transfer beyond it.

Switherward's Proelium concerns itself with internal matters; it can engage in international peacekeeping efforts provided it does not engage in hostilities. It maintains both the Triskel Space Station in the Thole system and the Pax Terra Space Station in the Sol system, and shepherds Swithwardian ships along  Convocation held shipping routes or trade lines. The Swithwardian Classis operates a large operational fleet of ships within space but also serves in suborbital and atmospheric roles, tasked with the same responsibilities as a contemporary air force. It is overseen on a witherward level by Madam Niera Vance, Ministre Plénipotentiaire (Plenipotentiary Minister).

The Greater Nifidum Convocation will not allow itself to become beholding to any outside body of governments to include the World Assembly, NATO, the Council of Europe, or the OSCE.

Swith Witherward, like all witherwards, is permitted to join non-allianced multi-national organizations.  It was briefly involved in the World Assembly during the Time of Strife but withdrew in 2013.
The Witherward does involve itself with humanitarian missions and is a founding member of: the International Red Cross & Peace Corps of Nation States (IRCPC), Thési Érevnah Province on Earth; the Multi-Species Union (MSU); the International Arbitration and Peace Association (IAPA).
War
Any attacks on a Greater Nifidium Convocation territory (outpost, station, research facility, witherward, withwardian province) usually result in a lethal response from the Convocation as a whole. Swith Witherward has no control over the Nifidium's decisions to protect its interests thus the witherward maintains a neutral and pacifistic demeanor when interacting with the nations of Earth and beyond. The Convocation's policy is to destroy a witherward rather than let advanced technology fall into the hands of younger, less knowledgeable races, ergo the Convocation will collapse the witherward's star. Witherwards are considered expendable for this reason; no attempts to evacuate will be made nor will apology be given to the innocent beings beholden upon that star for their existence.
Powered by