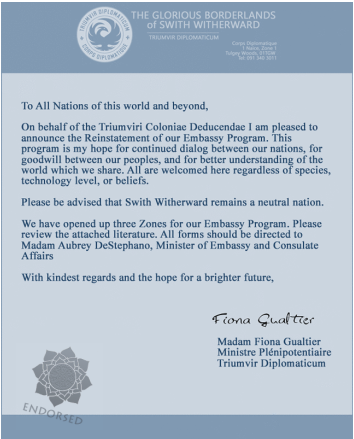 §532.4(C)3
Languages
The predominant government language is Nifendaer - however, translation services are available for a variety of species; Latin, English, French, Italian and German will be utilized for those nations headquartered on Earth.

Geopolitics:
Swith Witherward will not involve itself with any outside body of governments to include the World Assembly, NATO, the Council of Europe, or the OSCE. It withdrew from the World Assembly in EY 2013.

Armed Forces and Response to Acts of War:
Any attacks upon Swithwardian soil will be viewed as an act of war. Retaliation is governed by the overarching Greater Nifidium Convocation. The Convocation does not negotiate nor does it differentiate between a single terrorist and his overarching homeland or species.  Swith Witherward is bound by Greater Nifidum Convocation Law. It is thus advised that nations heavily consider the ramifications before committing terrorist or war acts on our soil.


§532.4(C)9
Laws Pertaining to Visitors and Dignitaries
We humbly request that all visitors, diplomats, foreign contractors or dignitaries abide by our laws. These laws are in place to preserve our environment, protect our citizenry, and keep visitors from harm.